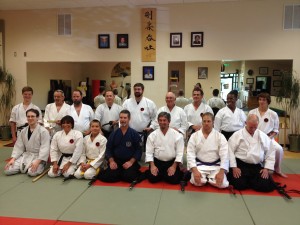 The Family Karate Center is proud to aid in the continuation and study of the the Japanese sword art, Iaijutsu, also known as Iaido. Founded 450 years ago, Iaijutsu, was created with the idea that one must draw the sword and cut with a single motion to defeat his opponent. Students who engage themselves in the study of Iaijutsu will learn a variety of techniques that range from standing (tachi-waza) and kneeling (seiza-waza) as well as Kenjutsu aspects (katachi) that are essential for mastering the concepts of Iaijutsu.

As practitioners of Muso Jikiden Eishin Ryu Iaijutsu, students are following a direct flow of knowledge that has passed from its creation to the 20th grandmaster, Miura Takeyuki Hidefusa Hanshi (1922 – 2012), to the 21st grandmaster, Masayuki Hidenobu Shimabukuro Hanshi (1948 – 2012), and now to the 22nd master of Eishin Ryu, Carl E Long Kyoshi.

The Kokusai Nippon Budo Kai is an international organization that was founded in 2007 by Masayuki Shimabukuro Hanshi, as a way to preserve and continue the traditional martial arts. The Family Karate Center is proud to be a member of the KNBK and help keep the knowledge of Eishin Ryu Iaijutsu alive and share the art for generations to follow.

During the time that a student will practice, we seek to develop a student’s mind, body, and spirit. Certainly, the body will develop as they learn to wield the sword (katana) and the various techniques that are Eishin Ryu, but we also seek to develop a focused mind that is attentive and ready, as well as building a spirit that is just as strong and important as the other aspects a student see in themselves.