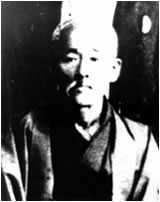 Grandmaster Kanryo Higaonna was born on March 10, 1853, in Naha, the capital city Okinawa. His father, Kanyo, worked as a merchant sailing between the small islands of Okinawa trading everyday goods. From a young age Kanryo Higaonna helped his father in this work and through the hard physical labor that was involved he developed a strong body.

Kanryo Higaonna was still in his teens when his father died suddenly. Kanryo decided he wanted to study the martial arts and he set his heart on traveling to Fuzhou, China for this purpose. He arrived in Fuzhou in the year 1869, he was 16. Once in Fuzhou, he studied the Chinese martial arts under the great Master, Ryu Ryu Ko. He soon became “uchi deshi” (private disciple) and he remained in China under the severe instruction of his teacher for approximately 13 years. In addition to studying empty handed martial arts he also became accomplished in weapons techniques and Chinese herbal medicine. Master Ryu Ryu Ko esteemed his pupil highly and sanctioned Kanryo’s mastery of these arts – an honor which is accorded extremely rarely. Such was Kanryo’s skill in the martial arts that his fame became widespread throughout Fuzhou and the surrounding area.

Chojun Miyagi (founder of Goju-Ryu and successor to kanryo Higaonna) said of Kanryo Higaonna, “My Sensei possessed incredible strength; the severity of the training he underwent in China is beyond comprehension…Kanryo Sensei’s speed and power were truly superhuman; his hands and feet moved faster than lightning.” Words cannot express his real ability. We can only say that his skill was incredible, but even this fails to do him justice.

The first occasion on which the previously secretive art of Naha-te was “opened” to society in general, occurred in October 1905, when Kanryo Higaonna began teaching at the Naha Commercial High School.

When teaching, Kanryo Higaonna was an extremely hard task master. However, in his everyday life he was a quiet and humble man and one who was renowned for his virtuous character. He was a man who had no need or desire for worldly things. He lead a simple life which was completely devoted to the study and practice of the martial arts.

There are many stories which relate tales of kanryo Higaonna’s life and training. The power of his legs was legendary, so much so that he was often referred to as “Ashi no Higaonna” (“legs Higaonna”) in Okinawa. His virtuous character was widely known and respected, and because of his popularity the people of Naha bestowed him with the name, “Obushi Higaonna Tanmei,” a name which reflected the affection and respect they had for this great man and supreme martial artist.

Kanryo Higaonna’s unparalleled skill in the martial arts aside, his great and distinguished work was in bringing the Chinese martial arts from China to Okinawa, and there spreading these arts among the people of Okinawa.

Kanryo Higaonna is now bestowed with the title, “Kensei (sacred fists) Higaonna Kanryo,” a title which is eminently fitting. His name is synonymous with Okinawan martial arts and naha-te, and his spirit is destined to live on forever as a great and valued treasure within Okinawan culture.

Kanryo Higaonna’s whole life was devoted to karate. He passed away in December 1915 at the age of 63.