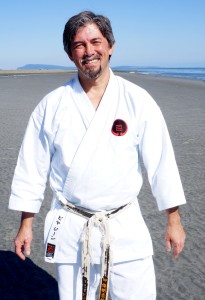 Sensei Gene Villa started his martial arts training in 1963 at the age of five under the instruction of his father, a 3rd degree black belt in judo.  As he got older, his interest in other martial arts grew.   This led him to study several martial arts: Shotokan (Karate), Kenpo (Karate), Thai Kickboxing, Chinese Wushu and in 1977 he found his favorite, a style called Goju-Ryu.

“Goju-Ryu” means hard and soft style, and the essence of the style is in the balance of strong, powerful techniques with more circular and flowing techniques. The philosophy of Goju-Ryu emphasizes the importance of balance between mind, body and spirit.

He receivied his 1st degree black belt in 1981, became an assistant instructor and in 1983 opened his first karate school.  From 1981 to 2004, Sensei Villa competed all over the United States winning many regional and national titles in kata (forms), kobudo (weapons), and kumite (both in point sparring and full contact).

To learn more about the art of Goju-Ryu, Sensei Villa began training in 1990 under Master Morio Higaonna.  Under Higaonna Sensei’s guidance, he has become one of the most respected Goju-Ryu instructors in the United States.