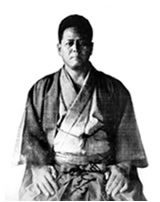 Grandmaster Chojun Miyagi was born on April 25, 1888. He began training in karate under Kanryo Higaonna at the age of 14, in 1902. Like his teacher before him, because of his great natural talent and fierce determination, he progressed very rapidly. The training was severe beyond belief at times but he practiced ever harder with an enthusiasm unmatched by any of the other students. Chojun Miyagi became “uchi deshi” (private disciple) of Kanryo Higaonna. He studied with his teacher for 14 years before his teachers death in 1915.

Chojun Miyagi, as successor to Naha-te pushed himself to the limits of endurance in his desire to emulate the extraordinary skills of his teacher. To this end, that same year (1915) he journeyed to Fuzhou, China the city where his teacher had studied the martial arts, to further his research. This was one of three trips he made to China during his lifetime.

On his return to Okinawa he began to teach martial arts at his home in Naha. Later, he also taught the Okinawan Prefecture Police Training Center, the Okinawan Master’s Training College and at the Naha Commercial High School (where his teacher once taught.)

Chojun Miyagi worked hard to spread karate throughout Okinawa and mainland Japan, and to earn Naha-te a status equal to that of the highly respected Japanese martial arts of judo and kendo. To achieve this he traveled frequently to mainland Japan where he was invited to teach karate at Kyoto University, Kansai University and Ritsumei Kan University. In 1933 karate was registered at the Butokukai, the center for all martial arts in Japan. This was a milestone for karate as it meant that it was recognized on a level with the highly respected martial arts of Japan.

Chojun Miyagi dedicated his whole life to karate. He was responsible for structuring Naha-te (which he later named “Goju-Ryu”) into a systemized discipline which could be taught to society in general. This teaching system which he formulated enabled karate to be taught in schools for the benefit of the young, and to reach vast numbers of people throughout the world. However, his private teaching at his home remained strictly in adherence to the principles and traditions of his teacher, Kanryo Higaonna, and his teacher before him, Ryu Ryu Ko.

The naming of Goju-Ryu came about more by accident than design. In 1930, Chojun Miyagi’s top student, Jin’an Shinzato, while in Tokyo was asked by numerous martial arts masters as to what school of martial arts he practiced. As Naha-te te had no formal name he could not answer this question. On his return to Okinawa he reported this incident to Chojun Miyagi. After much consideration Chojun Miyagi decided on the name Goju-Ryu (hard & soft school) as a name for his style. This name he took from a line in the Bubishi ( a classical Chinese text on martial arts and other subjects). This line which appears in a poem describing the eight precepts of the martial arts, reads, “Ho Goju Donto” (the way of inhaling and exhaling is hardness and softness).

The Succession of Goju-Ryu

Jin’an Shinzato, an exceptional talent and the one whom Chojun Miyagi had chosen as his successor, was tragically killed during the second world war. Later, after the war, Chojun Miyagi chose An’ichi Miyagi Sensei to succeed him, to pass on Goju-Ryu to the next generation.

Chojun Miyagi passed away on October 8th, 1953, leaving a great legacy behind. He predicted that during the twentieth century karate would spread throughout the world. Today we can see that his prediction has been realized; karate is not only practiced in Japan, but it can be found throughout the countries of the world. Karate can no longer be referred to as a solely Okinawan or Japanese martial art, but it has become and art with no boundaries, an art for all nations and all the people of the world.

The Philosophy of Grandmaster Chojun Miyagi

The philosophy that permeates Goju-Ryu Karate-do, that is the very essence of this art, could be seen in its most practical way by simply observing the life of Chojun miyagi. Indeed, Chojun Miyagi’s life and the way he lived his life was a perfect expression of the spirit and philosophy of Goju-Ryu Karate- do.

After the extreme devastation of the second World War Okinawa was left in the grip of terrible poverty. Housing and food were scarce. The United States Military had stockpiles of food and clothing and even the most virtuous of Okinawans would take these from time to time. On occasions when Chojun Miyagi was offered food or clothing he would always refuse and point out that what little he already possessed was sufficient for his needs.

Chojun Miyagi would never compromise himself. Whatever hardships he encountered in his life, his heart (mind & spirit) would never change. He would always stress that especially in the martial arts one must always be humble. The stronger one becomes, the more that person should express their gentler side. This is the meaning of “Go” and “Ju”.

Chojun Miyagi was a strict teacher of the martial arts but he showed great affection and love for his students. He would always consider the well being of his students, not only in their training but in their everyday lives as well. He would always try and guide them along the correct path.

The legacy of Chojun Miyagi is much more than just technique. He has left us with a philosophy which is profound in its simplicity; a philosophy to help us achieve truth and virtue in our lives.